Book your room directly on the website of our hotel, via e-mail or phone and we will give You many gifts. Collect the benefits and enjoy the advantages during your stay! Aquamarin Plus, it is always worth to book directly!

Home »
About the hotel

Following the parcelling out of the area between Hévízszentandrás and Hévízfürdő in the 1920s the Hungarian Royal Post purchased several estates in the area. The Hungarian Royal Post began to build its first holiday house (called Postás Altiszti Üdülő) in 1923, in Park utca (Park Street). A few years later, in 1928 the building of a second holiday house was finished (at the place of today’s Hotel Aquamarin). 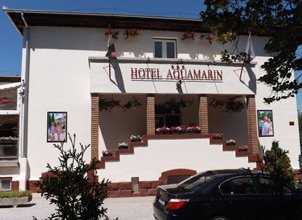 The hotel has its own deep bore well which provides the pools with thermal water since 1929.

The deep bore well produces 200 litres of water per minute from 117.9 metres depth. The 41- 42 °C water is rich in sulphur. The holiday resort has its own doctor since 1936. Since 1953 this holiday resort used to house Hungary’s first trade-union sanatorium (designed for the post officers). In the same year, another major step happened in the history of the holiday resort. Namely, the medicinal weight bath (subaquean traction bath), invented by the Moll couple, was first installed here.

Since 1957 the holiday resort has been functioning as a spa resort.

All year around Hotel Aquamarin in winter ....... and summer.

In 1981 a new wing was added to the hotel building which was completely renovated in 2009. The older, traditional wing "A" houses 40 rooms; while the three-star wing "B" houses 56 renovated rooms. The two wings altogether can accommodate up to 186 guests. The hotel features 1 outdoor (160 m2) and 2 indoor Thermal pools. The health services are based on the high quality thermal water.

In 2001, the local authority of Hévíz purchased the hotel. The hotel is run by the Aquamarin Szállodaipari Kft. In January 2020 sold it to Hotel Imperial Hungary Kft.